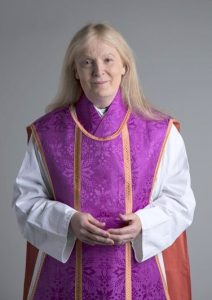 The Revd Dr Christina Beardsley (Tina) is a retired healthcare chaplain, researcher, speaker, author, and honorary assistant priest at St John’s Church, Fulham, London. A long-time advocate for trans inclusion in the Church, Tina was appointed in 2017 as a consultant to the Co-ordinating Group of the Living in Love and Faith (LLF) project. She resigned in 2019 and wrote this article for the Church Times to explain why.

We are unable to reproduce the whole of the article, but here are some extracts as tasters.

When the names of the first participants were announced, it looked as if the process would be covering familiar ground, and that people were being selected with a view to balancing one strongly held theological opinion against another. Reading the initial terms of reference, I found it all very disappointing.

Then, much to my surprise, I was invited to join the co-ordinating group as one of the consultants. I didn’t need much persuading. If I, a transgender priest, could be included, obviously things were going to be different this time.

Almost from the start, I knew that I would probably have to leave at some point. People may find this hard to believe.  …

I have sometimes likened my reaction to “fight or flight”, but that doesn’t fully capture the sense of powerlessness and oppression I have experienced.

Deciding to leave has been hard. … But the moment came. At our meeting in the second week of January, two triggers, in quick succession, brought matters to a head. An LGBTI+ person known to me was demonised. It was as if a mask had suddenly dropped.

Shortly afterwards, the principle of “no talking about us without us” was diluted, yet again, in relation to someone else I know. It was all too much.

I have touched on the first of my concerns: an overwhelming impression of privilege extended towards those who are male, heterosexual, and cisgender (i.e. not transgender). This imbalance is bound to skew the outcome. … LLF has often left me feeling marginalised and deskilled.

Although treated as a full member of the co-ordinating group, I frequently felt peripheral to a process that appeared to be tightly managed elsewhere. My suggestions or nominations were never taken up, and not always recorded in minutes. Narratives are crucial, and I began to realise that what I stood for was unlikely to be represented.

… The voices of some individuals and congregations will be heard, including those of LGBTI+ people. What will be overlooked, however, is their significance, owing to the following three assumptions.

First, it is assumed that the Church’s difficulties with sexuality and marriage can be resolved intellectually … Academic expertise is being privileged over the important consideration that people – including LGBTI+ people – are the experts on their own lives.

… Second, there’s an assumption that LLF is handling equally valid views about sex and gender, on which we can, in the end, agree to disagree. … In Transfaith (2018) … we gave evidence of the rejection that some had experienced in conservative churches, and the negative impact of conservative theology on their lives. … I heard from one young trans person during a workshop who admitted to “having huge panic attacks about ‘Does God hate me?’” after a spell in a conservative evangelical church. …

Third, there’s the presumption that an ongoing … discussion of sex and gender is a neutral process. It isn’t. It can be deeply undermining for LGBTI+ people to live with this kind of uncertainty, which inevitably implies that they are, at the very least, ‘a problem’.

… I realised that I could no longer, with conviction, continue to reach for that deep, but elusive, theological place where differences over sexuality, gender, and marriage might be reconciled. …

This article originally appeared in the Church Times on 1 February 2019. The article is to be found here: https://www.churchtimes.co.uk/articles/2019/1-february/comment/opinion/dr-christina-beardsley-why-i-left-the-bishops-sexuality-project. You may need to register with or subscribe to the Church Times in order to view it.