What is Living in Love and Faith? 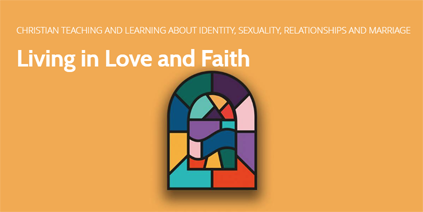 ‘Living in Love and Faith‘, often abbreviated to LLF, is an official project of the Church of England, intended to provide resources for Christian teaching and learning about identity, sexuality, relationships and marriage. The Church’s website includes an extensive section on LLF.

On 27 January 2017 the House of Bishops published a short report with a long title: Marriage and Same Sex Relationships after the Shared Conversations: A Report from the House of Bishops, GS 2055. In essence it recommended no change to the law of the land, to canon law or to the doctrine of the Church; however, it recommended a change of tone to make gay people feel more welcome. No services of blessing for the relationships or marriages of same-sex couples were to be allowed. An ‘annex’ of legal advice made it clear, amongst other things, that “it would not be lawful for a minister to use a form of service which either explicitly or implicitly treated or recognised the
civil marriage of two persons of the same sex as equivalent to holy matrimony”.

As the response to the Shared Conversations process, in which for two years LGBTQIA+ Christians had opened up honestly and vulnerably in what were often very difficult conversations, this was shockingly negative. Many of those who had taken part, and others, were not only bitterly disappointed but angry. They felt they had been misled, let down and denied any hope of real change. One such heartfelt response can be heard in the excellent sermon by Canon Leanne Roberts in the panel below.

Reactions to the House of Bishops’ report on sexuality (and the inauguration speech of Donald Trump) in the light of the Gospel reading for the day: the story of the wedding at Cana (John 2:1–11) – “Jesus offers us the wine of the Kingdom, and the Church offers us the Pharisaical water of ritual purity”.

It was therefore hardly surprising that General Synod, meeting a few weeks later, voted not to ‘take note’ of this conservative report – a most unusual step. The bishops were taken aback and realised they would have to change course. In response the Archbishop of Canterbury spoke of the need for “a radical new Christian inclusion”, and in June that year the Archbishops of Canterbury and York announced plans to produce a “major teaching document on marriage and sexuality”. That intention grew into the Living in Love and Faith project, involving study and discussion between people of a wide range of views and expertise. Some LGBTQIA+ Anglicans were invited to take part, though not all felt able to continue, finding the process lacking in respect and in some cases emotionally and spiritually damaging – more on this in a forthcoming article.

Living in Love and Faith was a project set up and run by the bishops, with the Rt Revd Dr Christopher Cocksworth, Bishop of Coventry, in overall charge as Chair of the Co-ordinating Group. Dr Eeva John was appointed Enabling Officer to plan and manage the process. In addition to the Co-ordinating Group there were four Working Groups, on Biblical Studies, History, Social and Biological Sciences, and Theology, each headed up by a bishop. The membership of the groups is given here.

LLF was meant to be completed by the end of 2019, allowing time for review and publication before the Lambeth Conference planned for June 2020. However, the Covid-19 pandemic caused a delay both to LLF and to Lambeth. There were three, perhaps four, main stages:

There was meant to be a review stage, when the drafts would be sent out to readers with different perspectives and experiences, but it is unclear whether this happened.

Finally, the book was prepared for publication, and the LLF video course and other materials and resources were created. 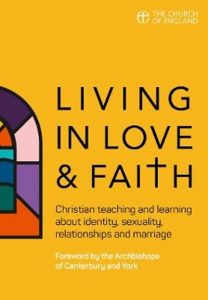 LLF was completed in November 2020 with the publication of a 480-page book also entitled Living in Love and Faith, available as a paperback from Church House Publishing (ISBN 9780715111673) and as an EPUB-format ebook, both costing £19.99. It can also be downloaded free as a PDF file from the Church of England website (here). Also available from their website is a digital library of other resources including videos, podcasts and a five-part video-based study course, the ‘LLF Course’.

Claims and hopes for LLF

The book’s back-cover blurb summarizes what the LLF team claims to have provided and its hopes for how it and the other resources will be used:

This book is one of the resources produced by the Living in Love and Faith project. Commissioned and led by the bishops of the Church of England, it has involved many people across the Church and beyond. They bring a great diversity and depth of expertise, conviction and experience to exploring these matters by studying what the Bible, theology, history and the social and biological sciences have to say.

The book takes readers on a journey that begins with reflections on God’s gifts of life, relationships, marriage and learning. A survey of what is happening in the world with regard to identity, sexuality, relationships and marriage is followed by an exploration of how Christians are to understand and respond to these trends in the light of the good news of Jesus Christ. The book then examines the ways in which Christians seek to hear God and how it is that they draw different conclusions.

The book invites the whole church to use the Living in Love and Faith resources to learn together. It closes with an appeal from the bishops to join them in discerning a way forward for the church that is open to new vistas on our disagreements and new perspectives on our differences.

It is clear from this that Living in Love and Faith offers a survey of where the church and the world are currently at in terms of our diverse understandings of human sexuality and relationships, but it does not come to any specific conclusions about the way forward, and it was never its aim to do so. It hopes to have provided a solid basis on which the church can now debate and discern the way forward. Whether this will happen, and if so in what way it will happen, time will tell.

When Living in Love and Faith was published on 9 November 2020, some responses came out immediately. To indicate the range of these, we have given summaries below of some differing reactions; these and others can be found in full in the Articles subsection.

So, given this very mixed reaction, how can the Church of England move on from here? And who gets a say in what happens?

The House of Bishops announced its plans in the press release that announced the publication of the LLF resources on 9 November 2020: “It is anticipated that the period of church-wide learning and engagement would take place during 2021. The House of Bishops would then bring the discernment and decision-making to a timely conclusion in 2022 which would then be put before Synod.”

Given that the LLF process took three years to complete, this seemed a very ambitious timescale for such a controversial and critically important next stage, and in fact it now seems that the ‘engagement, discernment and decision-making’ process will be extended into 2023. The Campaign hopes this will enable it to be thorough, or there will be no realistic chance of uniting the Church behind whatever ‘conclusion’ can be arrived at.

The House of Bishops has set up a Next Steps group to support and guide this process. The group consists of twelve bishops, led by the Bishop of London, Sarah Mullally; their names and titles are listed here (scroll up slightly).

The Next Steps group is keen for as many people as possible who have engaged in some way with the LLF materials (the book, the course, videos, podcasts and the other resources on the LLF Learning Hub) to feed back their thoughts, comments, reactions, and hopes for the future.

The Campaign wants to support this feedback process, and will be sending in our responses as an organization. We also want to encourage as many as possible of our Supporters – and indeed anyone who wants the Church to become inclusive in teaching and practice – to send in their individual feedback. The cumulation of many voices wanting change will have more effect on the bishops than any organizational response.

There are several ways to feed back, listed below. Whichever you decide to use, please consider sending a copy to us at contact@cofe-equal-marriage.org.uk, which would be helpful in formulating our Campaign response; we will not, of course, quote you or say anything that might identify you.

1. Fill out a survey

The LLF team have published an online survey hosted by Survey Monkey at https://www.surveymonkey.co.uk/r/LLFcourse. This is primarily aimed at those who have taken part in the LLF Course, but there are also opportunities to comment on the other LLF materials. The survey is straightforward and well thought out, with free-text questions where you can tell the bishops what you think. Do make the time to do it, and spread the word to encourage others to.

This section on the Church’s LLF web pages invites people to respond to LLF in a more ‘creative’ way, by using arts and crafts. They say “Make something that expresses your response to themes and subjects explored in LLF.”

Go to https://llf.churchofengland.org/course/view.php?id=27 – you will have to register for the LLF Learning Hub if you haven’t already done so – and click the ‘additional privacy policy’ link to access the upload area. Then you can upload your drawing, sculpture (presumably as a photo), cake (ditto), poem, song, satirical cartoon, and so on. (Actually they don’t mention satirical cartoons, but they probably think it doesn’t need saying.)

If you want to send a message to the Next Steps group, there is a contact form at https://www.churchofengland.org/resources/living-love-and-faith/contact-living-love-and-faith-next-steps-group. This would be ideal if you want to compose a letter or article giving your personal vision for how the Church of England should change to embody the “radical new Christian inclusion” that Archbishop Justin called for.

Especially if you know them personally, why not get in touch with your diocesan bishop or an appropriate suffragan/area bishop and tell them how you feel (courteously, of course). If they are sufficiently supportive it might be possible to have a useful discussion with them. If they are already involved with the LLF process, so much the better – but they don’t have to be.